Miranda: When the Truth Hurts 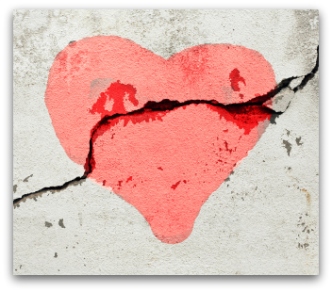 Sometimes we hold onto an idea, an ideal, an intention for so long that it takes on the patina of something holy. We clutch onto this ideal with complete conviction, confident that any conflicting ideas are wrong, implausible, outrageous. Over many years, pressure accumulates underneath that ideal. And then one day, the ideal cracks open and reveals something more useful: the truth.

So it is for me in my navigation of motherhood and work. For all of my 21 years of being a mother, I’ve held onto the ideal of being at home with my children as much as possible. Early on, I had many fulfilling years of being at home with my kids fulltime. Slowly I built a freelance business that took off after my three oldest were in grade school. But then two more children came along, during years that were full of intensifying work stress and all that goes with being a creative entrepreneur. Still, it was essential to me that I be at home with my kids as much as I could. I somehow thought less of women who worked fulltime “by choice.” I relied on at-home babysitters and then part-time preschool to cover the bulk of my working time — except that there never was enough time. This meant long periods of working nights and sporadically on weekends in order to make it all happen. And while it’s hard to admit, there were too many times that I relied on the electronic babysitter to buy me some more time just so that I could get “a little more” work done. Working at home, and always being at home, seemed to mean that any time could be work time. I never managed to create the boundaries that I thought would reduce my stress level and help me be more present.

Figuring out how to work less, do less, and parent more has long been my struggle. I’ve written at this blog about the vortex of caring for young children, the difficult transition back to parenting after the work day, wanting to do less, enjoying the successes, and then adding more to my plate — things that I’m deeply passionate about, like becoming a creativity coach and opening a studio for all things related to creativity, well-being, and life design. With three different businesses to tend to, pushing the envelope took on a whole new meaning.

While I continued to heap ever more items onto the “things I’m doing” pile, my perennial plan was to be more active and engaged on the motherhood front. I wanted to have a weekly family project routine — but never managed to make it weekly. I’d get excited about a project and my youngest would get bored in five minutes and that would be that. I dreamed of being a mother like this one — more than dreamed; I intended it, for years — and that intention never materialized. I’ve been busy doing lots of other things. And yet I keep intending, as if somehow that intention could shield me from the reality that I was choosing something else.

So when do intentions turn into untruths? Stuck somewhere between “It’s the thought that counts” and “The road to hell is paved with with good intentions,” I refused to believe there was anything different I could aspire to. But isn’t the truth found in my actions, collected over the years, rather than my to-do lists?

Today, my kids are all in elementary school, high school, and college, aside from my very youngest, who turns four next month. On Tuesday, Wednesday, and Thursday, Liam goes to preschool until 3:30. He’s home with me every Monday and Friday. On those two days we do errands and go to Liam’s gym class and sometimes see friends. I try to spend some amount of time doing whatever it is Liam wants to do, rooms away from my laptop and iPhone. But it’s not a lot — not even the majority of the day. Most of the day, I’m working. Liam doesn’t mind in the least; he’s happy to watch his favorite programs or play Star Wars Lego for two hours — or more (ouch). He likes to be at home, and he doesn’t like to go to school. So I’ve told myself that this arrangement is for the best. A young child needs to be with his mother, even if she’s sitting at the table working. I bristled at my husband’s suggestion that we consider putting Liam in school five days a week. How dare he suggest such a thing? I’m not the kind of mother who would stick her four-year-old in school five days a week when it wasn’t necessary. It wouldn’t be good for him. Obviously!

I can see how this might sound like a little thing. Two more days of school? Millions of four-year-olds go to school five days a week. What’s the big deal? Of course Liam will be fine. But it is a big deal. It’s a huge deal. The remains of the mother I’d intended to be is wrapped up in those two days. A mother who puts her children in front of her work. A mother who puts her children’s best interests ahead of her own. A mother who, after 21 years of mothering, wouldn’t shortchange her youngest child.

The truth is that I’m deeply passionate about my work. I want to do my work. I don’t want to do less, and I can’t shoehorn three businesses into mother’s hours three days a week. If I were able to find a school where Liam was happy, I wouldn’t feel quite so guilty about five days a week. In seeing this truth, in accepting what is, I’m facing what is real and true and me, instead of bowing under the weight of my own shoulds and shouldn’ts.

Aligning with truth rather than intention feels very much like cracking open. It isn’t a good feeling, yet — but I know that allowing the truth to unfold is the only path to an authentic life. And if I want to live authentically, fessing up to my self is surely the best place to start.