Approximately 84 years ago—back in January 2018—we introduced you to writer Elisabeth Pike. Since then, Liz welcomed a fourth child and launched a new creative initiative, Voice at the Window: 100 Gratitude Poems Written During Lockdown, which we’re glad to share with you today!

Liz Pike lives in Shropshire with her husband and four young children. She writes short stories, fiction, and poetry. Her work has been published in the Guardian, Third Way, and Fractured West, among others. She creates hand-lettered giclee prints of her poems as well as commissioned work. Liz also teaches creative writing to children. She previously worked as a bookseller and librarian and earned a master’s in creative writing from Goldsmiths University, London. She likes long train journeys, old photographs, and earl grey tea.

“These are all common miracles, moments of the extraordinary within the everyday”

Tell us about your new project! 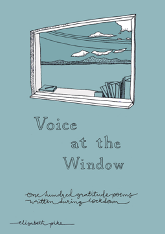 In February, while we were still in the dregs of winter, I was feeling low and decided to post one gratitude poem each day instead of scrolling on social media. I found that it really helped me to look for the good in each day even when it had been hard. The project was originally intended to be for lent, but as I received such a good response to my poems, I kept going until I reached 100. I am now launching a Kickstarter campaign to get the collection of 100 gratitude poems into print.

Where did the title come from?

I played around a bit with it, but in the end, I just felt that every time I stood at my window looking out, I was with everyone else in the country and they were all with me at the same time. There we were, the entire country, isolated, and shut away in our tiny boxes. Some were lonely, some were crammed in with no garden. Some were full of anxiety, some grieving. But that image of being at the window, looking out, seemed to sum up the whole of lockdown for me. So, the voice at the window is me, but it is also all of us.

What was your experience of lockdown?

Well, it was busy! I have three primary school aged children and a one-year-old. Thankfully my husband was working from home too so we were able to tag team with home schooling and getting on with our own work. We also moved house right at the beginning of lockdown. So, although we were isolated, we were certainly never bored!

What are your hopes for this collection?

I hope that people will consider supporting my Kickstarter, and I hope that as this project goes a little more public, that people will read the poems and see them as representative of themselves too. And maybe the book will inspire a few people to notice and be thankful for those small moments of joy; a cup of tea in peace, listening to the birds sing, watching the sky melt into an inky blue. These are all common miracles, moments of the extraordinary within the every day. As I wrote the poems, I was aware that they were extremely personal, but also, somehow universal, as we have all journeyed through this strange time, alone but together.

Tags: covid19, Creativity, family, kickstarter, lockdown, motherhood, pandemia, poetry, practice, presence, publishing
From: Miranda
← Superheroes at Home
Mothering at Midnight? I Got You →
No comments yet