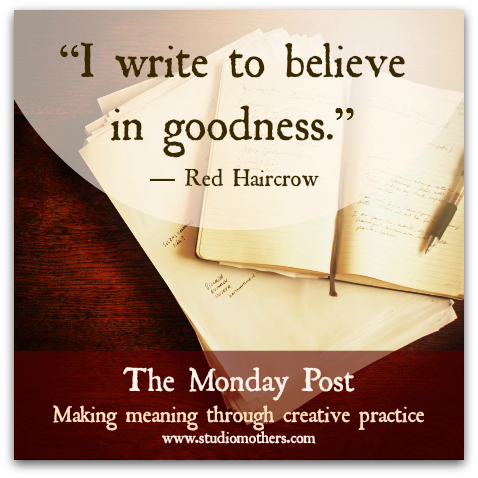 Commit to a regular creativity practice. Regularity — a daily practice, if possible — is key to staying in touch with how you make meaning.

What are your plans for creative practice this week? Given the specifics of your schedule, decide on a realistic intention or practice plan — and ink that time in your calendar. The scheduling part is important, because as you know, if you try to “fit it in” around the edges, it generally won’t happen. An intention as simple as “I will write for 20 minutes every morning after breakfast” or “I will sketch a new still life on Wednesday evening” is what it’s all about. If appropriate, use time estimates to containerize your task, which can make a daunting project feel more accessible.

Share your intentions or goals as a comment to this post, and let us know how things went with your creative plans for last week, if you posted to last week’s Monday Post. We use a broad brush in defining creativity, so don’t be shy. We also often include well-being practices that support creativity, such as exercise and journaling.

Putting your intentions on “paper” helps you get clear on what you want to do — and sharing those intentions with this community leverages the motivation of an accountability group. Join us!

If you’re an artist or writer with little ones, The Creative Mother’s Guide: Six Creative Practices for the Early Years is the essential survival guide written just for you. Concrete strategies for becoming more creative without adding stress and guilt. Filled with the wisdom of 13 insightful creative mothers; written by a certified creativity coach and mother of five. “Highly recommended.” ~Eric Maisel. 35 pages/$11.98. Available for download here.

Once upon a time, there was a woman that was going down
a new road.
An unfamiliar road. Her friends at first, were right alongside her, cheering her on. Applauding her. Supporting her. Uplifting her. Believing in her. They were cheering her on. 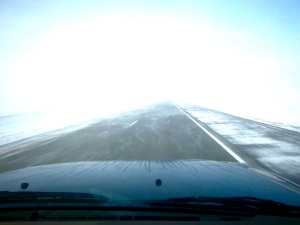 But this woman —
she believed in herself.
She had FAITH.

She took the time to listen to that still small voice deep within her soul. She wrote feverishly in her daily journals. She wrestled with so many ideas and thoughts.

She knew the road looked unfamiliar.
And she also knew some of her friends would fall away. Stop supporting her. Go on with their own lives and their own plans.

She knew she had to go down this road
herself.

And make her own decisions. 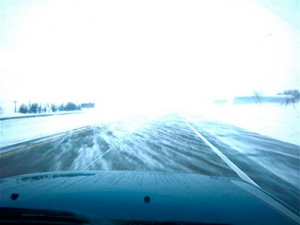 ND roads, Feb 6, 2011
And despite the disappointment she felt, knowing those friends were no longer beside her, she pressed on. She pressed on. She gained more faith in herself daily. She grew stronger.She started to believe in herself even MORE.
She walked down that dangerous road with more purpose, with more tenacity than ever before.

She recognized the people along the way that were only there to sabotage her plans. Inside deeply, if they were to stop and think, they wanted her to fail. They wanted her to not succeed, for it would make themselves look better. These people would indirectly try to thwart her determination, they would try to rain on her parade. These people would try to squash her dreams.

As she walked on the dangerous road past them, all she could do was walk by and smile. Just smile. These people were once her friends and now, were becoming part of her distant past.

This woman grew stronger.
She recognized those people in her life that truly had value.
Lasting value.

The people that were still there, cheering her on and helping her along this dangerous road.
This unfamiliar road.

At times, she couldn’t see what was to come, but these friends —
they held her hand, and assured her that THIS is where she should be traveling.

They gave her even more FAITH.
They truly believed in all she had to offer the world.

And this woman?
What did she learn?

She learned to follow her own path, her own road, no matter how scary it looked. For she knew she had good friends and people in her life, that would be there if she fell down. If she took a wrong turn. And these same people would be there for her when she reached her destination. They believed in her. They so believed in all she could be.

IN ALL SHE COULD BE.

This woman learned to press on.
And believe in the woman
she was becoming.

[Crossposted from A Life Unrehearsed]