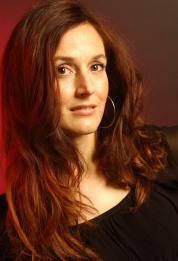 Editor’s note: This interview is generously cross-posted from Alison Wells’s Head Above Water.

Laura Wilkinson grew up in a Welsh market town and as a child was a voracious reader. She has a BA in literature and worked as a freelance journalist, editor and copywriter. Her first novel, BloodMining, the story of a young woman’s quest to uncover the truth about her origins to save her son’s life, will be published in autumn 2011 by Bridge House. She currently lives and works in Brighton, England.

Tell us about your children, Laura.

I’ve two boys: Morgan, twelve, and Cameron, seven. They’re glorious redheads; I call them Ginger1 and Ginger2, and people comment on their extraordinary hair colour all the time, especially as both their parents are brunettes. You can imagine the comments!

When did your writing begin?

As a journalist, copywriter and editor for many years before the children came along, and then alongside them. Fiction came later, around five and a half years ago, once I was out of the totally sleepless nights period with my youngest. Both my boys were horrendous sleepers! My routine has always been fixed around the major needs of the kids and, so far, it seems to work for all of us.

What impact has having children had on your writing career?

Having the boys focused me. I’d harboured a desire to write fiction for years, but work and other stuff (like going out, partying, and other hedonistic activities) got in the way. As well as fear. After the children came along I became more aware, more centered, and the brevity and preciousness of life hit me, hard. I knew that if I didn’t at least try to write I’d have let myself down, and the boys somehow. Now I use the little free time I have doing something that stretches me, challenges me, surprises me, and I find that really, really exciting.

How do you organise your writing time and space?

I work four days a week, so on these days I tend to write in the evening, once the boys are in bed. 9pm to 11ish, sometimes later, depending on how it’s going. I have been known to rise early, 5am, and write for a couple of hours before the rest of the house wakes up, though this is hard during the winter months. I don’t manage this every day, but I aim for three or four evenings/mornings a week.

On my ‘free’ day I write as much as I am able. On good days, I can write for two or three hours, take a short break, and then carry on for another two. Then it’s time to get the kids from school. Other times I find it much harder to get going, and then I might go for a walk, or pop out to see a friend, and then come back to the work. I cherish this day and I guard it ferociously. No visitors, no housework, no shopping. Writing.

I’m workman-like in my approach. I aim for 1,000 words each sitting. Of course, I don’t always manage this. Some days I might churn out a mere 400, but on others I might reach 3,000. It’s a productive week if I manage 5,000 words. My pattern is that I start slow (and yes, it can be extremely painful) and pick up momentum as I go on.

For first drafts I write on a laptop in bed, often in pyjamas, or slouchy clothes. A bed is a place for dreaming and passion. Perfect for first drafts. When I’m editing I’m at a desk on the landing, or at the dining table, in a straight backed chair, fully dressed, blusher and mascara on. Editing is business-like and often cruel. As you will have gathered I don’t have a room of my own; I would love a writing shed, or office. Twitter is my favourite new online habit and I have tweeted about this, demonstrating severe shed envy. I live in hope.

Is it possible to maintain a balance on a daily basis or do you find yourself readjusting focus from work to family over a longer time-span depending on your projects?

The nature of children and family life requires a degree of flexibility, so, yes, I do readjust my focus periodically. The ease with which I achieve this depends on the stage I’m at with any given piece of work. Long haul projects like novels require momentum, especially when creating a first draft, and breaking the rhythm makes picking it up again difficult. I speak from experience here. Usually, editing comes with deadlines. Writing is a craft, and requires regular practice, so while we all have to adjust to life stuff that comes our way, my motto is to write as often as possible. That said, when the boys are sick, or need extra emotional input, it’s difficult to write and I’m not going to beat myself up if I don’t during times like this.

How do the children react to your writing or the time you spend on it?

My eldest is proud, I think. He will ask about the story I’m writing, often presenting some penetrating and challenging questions, and he’s pretty excited about my first novel coming out. My youngest hasn’t shown too much interest. He knows Mummy reads and writes ‘all the time’ (I bloody wish), and often picks up whatever I’m currently reading and flicks through the pages and asks if my books are as long. When I reply that they are, he sighs, shrugs and wanders off. I suspect he thinks I’m fibbing. Perhaps once my debut is out, he’ll believe me!

What do you find most challenging in juggling your role as a mother, your writing and your work?

Practically, it’s time. There’s never enough of it. I wish my sleeping habits were like those of Margaret Thatcher. During her premiership she claimed to sleep for only three hours a night. Unfortunately, I need seven or eight to function. And there’s the need to make money. A private income would remove the need for paid work, and then I could spend everyday writing. Bliss.

Emotionally, I suffer Guilt, with a capital ‘g’. For not playing with the boys more, for daydreaming when we’re together, for not baking beautiful cakes, and so on. But most mothers I know, writers or not, feel guilty. On the plus side, my boys are very good at entertaining themselves. Having a dreamy, distracted mother has made them resourceful and independent.

You’ve had success with having BloodMining accepted for publication. Why do you think your breakthrough happened when it did? 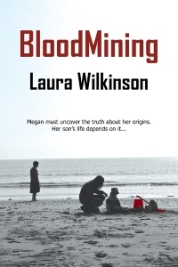 The first short story I wrote won a (minor) competition and was published. My youngest was three. This gave me a misguided opinion of how hard it was going to be. Years later I realized just how lucky I’d been. I began my first novel when my youngest was four and my eldest nine. It took two years and several drafts to complete. Proper authors — people who had masters’ degrees in creative writing and even had books of their own published — were encouraging, and so I entered some debut novel competitions. While I was waiting for the results, a period of around eight months from entry to final announcement, I wrote a second novel.

To my surprise I was shortlisted in two novel competitions, one of which I went on to win. Back in November, when I received the call from Debz Hobbs-Wyatt at Bridge House I was at work, in the staff-room, I had to sit down. For days I wandered round in a state of shock. I told few people; I didn’t believe it was real; I expected the ‘Gosh, I’m so, so sorry — we misread the winner’s name, it was Laura Williams that won, not you,’ call. It never came and, slowly, I’ve come round to the idea that it’s going to happen.

The children were settled at school and content during this period. In September last year they both changed schools and it’s not been an easy time, emotionally, especially for my eldest who started senior school. During this period I completed another two drafts of my second novel, though I’ve not been as productive as I’d have liked. Things have settled down now so I’ve started a third novel, as well as getting a submission package together for novel #2 and working with my editor on BloodMining.

In all honesty, I have no idea why it happened when it did, and I guess you could say that it happened because I was persistent. A writer needs to be tenacious.

I’d love to able to say that the pressure facing both sexes is equal but I can’t. It’s a fact that women still do more than their fair share of childcare and housekeeping. But we can’t blame it all on the fellas. We take on too much. And whether we’re conscious of it or not, many of us (I include myself here) are reluctant to let go of these responsibilities, to trust that men can do them as well as we can. It’s a rare relationship where the split is even. Perhaps gay women manage it. I’ll ask a friend about this.

Something has to give when wearing many hats, what is it for you?

Housework. I was never much cop at the domestic: cleaning, home decoration/making beautiful, cooking. But no one died of a grubby house or the odd take-out, did they?

What suggestions do you have for mothers or indeed parents who want to write or further a writing career?

Write. Forget ironing. Don’t give up the day job (at least until you’ve the three book deal with the six figure sum) , your kids won’t thank you if there’s no food on the table.

Thanks so much to Laura for telling us about her experience of being a writer mother. We wish her tremendous success with her new novel BloodMining and look forward to it coming out in the Autumn. For more news on her novel and other projects visit Laura at her blog Sting in the Tale or follow Laura on Twitter.