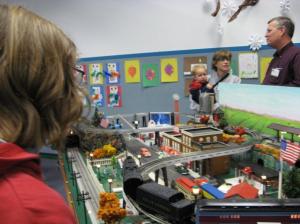 That's K, hiding behind his hair from the camera at a model train event we dragged him to in December

This weekend (I’m beginning to feel like the SNL weekend update segment, sorry gang) my son K spent a great deal of time not with the family. This has been a growing trend as he is a teen, a concept I am still getting accustomed to. I have been preparing myself through most of his childhood for this phase, but still. He will turn 14 at the end of next month. A particularly mind-boggling concept as I am still suffering sleep deprivation with another who will turn one at the beginning of the same month. He has essentially acted like a teen since he was about four, but his lack of physical presence really capitalizes the enormity of a life change set in motion. It’s not just his, it is mine as well.

Friday night, he went out with a gang of neighborhood friends to the local Iceplex, where he skated for a good four hours into the night. I think of myself at the same age, and remember roller discos, rainbow suspenders, and blue suede sneaker skates with yellow wheels. Oh hell, tossing all caution to the wind here as I can’t refrain from mentioning the yellow velour v-neck and the skiiinny skin tight jeans with yellow satin embellished seams and pockets. Thank god K doesn’t have to suffer through the fashion horrors of my youth, but he did fall on the ice “only six or seven times, this time, I swear.”

Honey and I watched Knocked Up on HBO and when it came time to pick K up, Honey leaned over and said, “ Hey, you gonna go get your kid?” As Baby C had just fallen asleep post-breastfeeding on me, I asked if he wouldn’t mind instead. Neither of us was too keen on heading out nearing 11 in the evening, no matter how much I wanted the kid back in the house. When he came home, he was still up for more action, even though all we wanted to do was turn in. After a bit more tv viewing together, peppered with icy fun tales, we turned in. Most of Saturday, with the dreary weather, he pretty much kept to his own in his room, then I dropped him off for an overnight Lock-in for the coming-of-age program at our fellowship, not to be seen or heard from again until I showed up for the 11 am service on Sunday.

When I did, he barely spoke to me. He’s getting more independent every day, and taller. He’s slower at it than his friends who mostly tower over him. But he’s my height now, and he wasn’t just three days before. I know because we measured. Part of the Lock-in was a secret letter from parents reveal. Being a child of divorce and blended families, K received four. I felt it important to include his father and stepmother in the ceremony and had procured letters from them as well. I still don’t know what Honey wrote. We were supposed tell the kid about his birth or his arrival in the stepparents’ lives, how it changed our lives and what we hoped then and for him now, and in their future. On the way home, he found the one negative he could make out of my letter: apparently I forced him to listen to Bob Dylan, he hates Bob Dylan, never mind the rest of the music I mentioned pumping through earphones to my belly with him in utero. But he kept mentioning how funny his father’s letter was and how he would read it to all his friends. I felt a twinge of disappointment, but assured myself, it’s because I am the present parent he feels comfortable enough around to give me the grief a teen gives, and he hero worships his dad because he’s long distance. He also began the conversation with “I wish you would stop asking me questions I don’t want to or need to answer. You don’t need to know everything about me.” I had asked if he had fun.

It is a heart-wrenching thing, but in a mild form to find yourself at the other end of a parent-teen relationship. Sometimes I still feel like I’m working out my teen issues with my mother, and often feel like the misunderstood, socially awkward, skinny little twerp I was, so how could I possibly be the mother of a teen myself? I am proud of him in many ways, as he is intelligent and creative, a conscientious student and person regarding politics and social justice. He’s also a big help with his baby sister and somewhat around the house. I know he is a loyal friend to his friends, and a great defender of his brother when others make fun of “the short bus” or look at his brother askance. However, I also feel like this is my last chance to get it right for him. Right now, the formerly affectionate big-hearted little boy is a very stiff, emotionally defensive young man, who prides himself in the use of sarcasm and skepticism to wend his way through the world, and to be incredibly cruel at times to his brother, who has difficulty picking up on the subtleties of social cues most of us take for granted. It’s definitely not okay in his book for others to point out S’s difference, but acts as if the same is his birthright.

My biggest struggle in this particular transition of life is to know when to back off and when to intervene. Or when to tell it like it is or keep some things under wraps a while longer. I feel him drifting away, and know he should, but how far, how soon? Where is the balance for me to love him well enough to let him go? How do I let him go without the repercussions later, of not being more available to him at this stage between my attention-demanding baby, special needs son, and the completion of my manuscript?

These in a way are the same questions we are always asking of ourselves as mothers. How do we get it right? But now, I face the urgency that in a few short years, I send him off, truly on his own, to face the world, whether I’ve prepared him well for it or not. Only time will tell if I did, in fact, get it right.