Whether you live in a northern or southern climate, you have to admire snow, what with all that “no two snowflakes are ever the same” stuff. Quite a variety of entries for this week’s creativity contest, too! Our winner is Bec Thomas, for a brilliant photograph. Bec writes: “This is a picture taken at Camano Island State Park during a freak snow storm. The ducks were very cooperative about flying at the right time.” Wow, Bec. Your $10 amazon.com gift certificate has been issued. 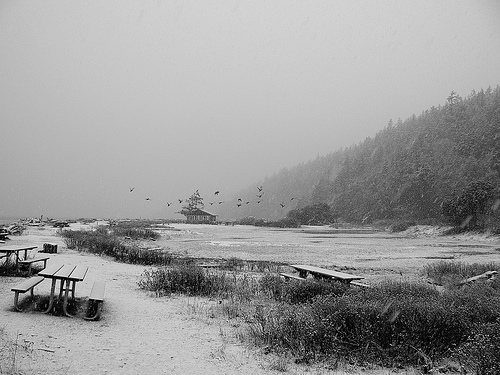 From Karen Winters, a painting. Love the red! Karen writes: “We don’t have a lot of snow in Southern California, so I had to draw upon other inspiring places. This was my Christmas card for December 07.”

From Kelly Warren, a photo (just try not to smile): “Well, I wanted to write something fun and witty to go along with this, but time just got away from me, so I’ll just share the pic. Here’s a Florida ‘snow bunny’ for you.”

From Cathy Coley, a poem. Cathy writes: “lotsa of thoughts: blizzard of 78, digging tunnels through my parents’ front yard; oct 4, 86? snow dump in the berkshires that shut down campus for days; april fool’s day storm of ’97, throwing k in snow toddler-shaped ‘wiley e coyote’ prints, 3ft deep; sprinkles on eyelashes, shoveling out cars, snowball fights, skiing, you name it. in the end:”

Snow
crystal heaven falling
every birthday, just for me —
silent conversation with god

From Juliet Bell, a series of fascinating images: “These are not exactly snow, but I thought I’d send some samples from photos I took last year of frost on my kitchen windows. I tried to design repeating fabric designs from them with little success. I guess you just can’t improve on such beauty.” 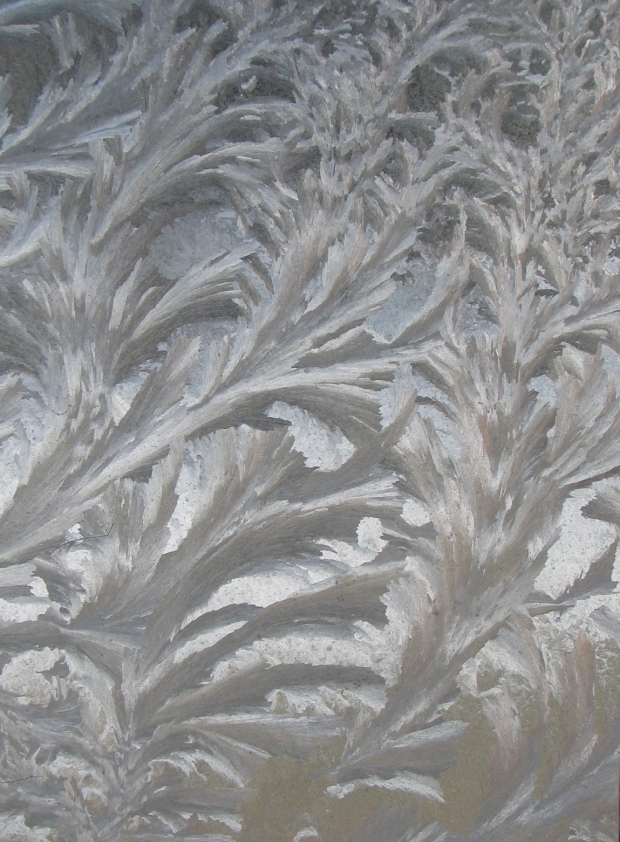 From Brittany Vandeputte, a set of photos with a poem, described by Brittany as: “This is a silly poem I wrote about Sam’s first 10 minutes in a Syracuse snow shower.”

I do not like the snow he sneezed
And I wonʼt walk the stand of trees
In snowdrifts up above my knees
Iʼd rather sit here where Iʼll freeze
Than play outside today.

From Marsanne Petty, another double entry! Hey, Marsanne, don’t make the rest of us look like slackers, OK? 😉

a) When It Snowed In Florida

I’ve lived in Florida my entire life – all thirty years. We’ve visited other states from time to time, and found ourselves with near misses of views of snow. It melted the day before we arrived, or fell the day after we left. But never any exciting views of snowdrifts as high as our heads, or windows being blocked by snow piled high in front of them. No shoveling sidewalks or watching the machines ice the roads so traffic could proceed. Nope, none of that in Florida.

It started on a winter night in 1989, while we were in Valdosta, Georgia, a mere thirty minutes from our house in Jennings, Florida. We often shopped in Valdosta, and this was one of those evenings. My dad, my sister, and I were sitting in the car, waiting on my mother to come out of the store. As we waited, it began to rain. Gradually it turned to sleet. Restless as children are often prone to be, my sister and I begged our father to let us out of the car. After a while, I suppose he got tired of hearing us whine, and relented. We played in the parking lot for a while, and dad sat in the car. Suddenly, he rolled the window down and started pointing. Without us even realizing it, the bits of sleet had turned into tiny, icy snowflakes. Certainly not the fat, fluffy ones like you see in the movies, but snowflakes, nonetheless. We tried to catch them and they melted the moment we touched them, so great was the difference between our body temperature and the iciness of the snowflakes.

Finally, mom came out of the store. We all piled back into the car and, on the trip home, watched with growing excitement as the snowflakes continued to fall. Weather reports predicted the snow would fall intermittently throughout the night, and temperatures would remain below freezing throughout the next day. When we got home, there was a slight dusting of snow on the ground. Dad went and turned the sprinkler on and set it to run over the swing set, so we would have our own personal winter wonderland. We were rushed into the house by Mom, who watched us gaze in wonder as each of our footsteps dissolved the snow beneath our feet.

The next morning was lovely. A mere four inches of snow might not seem like much in most places, but in Florida, it is enough to constitute a thing of beauty. We awoke to a literal snowfall. Of course, everyone was excited. We decided to make an adventure of what could possibly be a once in a lifetime opportunity.

My dad had a huge four wheel drive truck – a 1986 Dodge Ram. The most fabulous blue color one had ever seen. He bought it brand new at the Dodge dealership in Valdosta, and was always happy to display the prowess of his truck. We often took it mud bogging in the nearby swampy areas year round, and in the summer, when the Alapaha River went dry, we took it riding in the slippery river sand.

As we drove from our house to my grandmother’s house, there were cars stuck on the roads and in the ditches. The ice on the roads was simply too much for them – it was too slick, and the Florida drivers had no idea how to handle it. Dad pulled them out, using his four wheel drive.

My uncle had the great idea that we could ski on the roads, since they were covered in ice. Of course, no one had any skis, but with warm water practically year round, we had plenty of equipment for water sports. The two items chosen were a large yellow inner tube and a hydro-slide – a board similar to a surfboard, but instead of depending on the waves to move you, the rider sits on the board and holds a handle attached to a rope, and is pulled by a boat in the water. My father pulled each of us down the highway on the inner tube and the hydro-slide, treating the icy roads much like the warm rivers we were used to.

My aunt, shown here, was a major sun worshipper back then. She loved the beach, craved any amount of time she could spend at the beach, the river, a lake, any piece of sun that she could subject her body to. Her desperation was evident in the playful way she posed that beautiful white day. She wore a tank top and a towel, lying on the hood of her snow covered Camaro, with the words “Beach or Bust” written on the windshield.

Several of us kids walked down the dirt road to a nearby creek. It was iced over, but still flowing beneath the thin layer of ice. Being a rural area of the state, the creek ran under a wooden bridge with a small guard rail which consisted of a 1×6 board placed on blocks. We built our first snowman with snow gathered from the bridge and the guardrail. He ended up being about six inches high and rather sloppily made, because there wasn’t much snow and it didn’t want to stick together very well. Unfortunately, that was also the last snowman that I’ve ever built up to this point.

Although on occasion, there have been reports of snow flurries throughout the years, none of them have touched our area the way the snow did in 1989. None have transformed the sunshine state into an honest to goodness winter wonderland. Living in Florida certainly has its benefits – large amounts of warmth being one of them – but it also has its moments of magic, of memories that can never be recreated, simply because of the location. It’s doubtful that I will ever have another delightful winter day like that one, but that doesn’t mean that I can’t wish for it now and again.

b) “Both my husband and I have lived in Florida our entire lives. He went to work out in New Mexico this year and he said it was a lot colder there than it was here in Florida. It snowed on him (not his first time seeing it) but he built this snowman and sent the picture to me, so that I could see what a “real” snowman looked like. The resolution isn’t fantastic because it was from his camera phone, but I still enjoyed the picture.”

From me (Miranda), a poem composed while waiting for my daughter at the dentist’s office — my two little ones amused themselves for the most part and I was actually able to draft most of this, a meditation on sleep deprivation.

~~~
The fatigue is a snow sky
wrapping me in grainy film
a whiteness that shares no secrets.
Snowflakes pepper my skin
my sense of self
with pinprick holes through which
my breath escapes, leaving me sightless
heavy and numb

This week’s prompt: “Wool”
Use the prompt however you like — literally, or a tangential theme. All media are welcome. Please e-mail your entries to creativereality@live.com by 10:00 p.m. eastern time (GMT -5) on Tuesday, January 20, 2009. The winning entry receives a $10 gift certificate to amazon.com. Writers should include their submission directly in the body text of their e-mail. Visual artists and photographers should attach an image of their work as a jpeg. Enter as often as you like; multiple submissions for a single prompt are welcome. There is no limit to how many times you can win the weekly contest, either. (You do not have to be a contributor to this blog in order to enter. All are invited to participate.) All submissions are acknowledged when received; if you do not receive e-mail confirmation of receipt within 24 hours, please post a comment here. Remember, the point here is to stimulate your output, not to create a masterpiece. Keep the bar low and see what happens. Dusting off work you created previously is OK too. For more info, read the original contest blog post.