I am learning more and more about boundaries.
About what it feels like to stand up for myself and proclaim that something in my life is not acceptable.
I’ll admit, it finally feels good.

For so long, I’ve felt I wasn’t worthy.
Not worth standing up for myself.

Being in this course right now is helping. It really is. I’m learning to look at myself and see that my life is worth living happy, instead of full of manipulation and other peoples’ issues.

It feels great.
So so freeing!
I’m happier now than I have been in years.
Years.

This book is on my bookshelf right now:
Boundaries: When to Say YES, When to Say NO, To Take Control of Your Life

That I am not defined by others’ perceptions of me.
I am defined by the woman I am.
The soul that’s inside me.
That is what makes me.

And if others in my life fail to see it, or fail to recognize the value of my person, that’s okay. I am learning to understand they have their own issues, their own perceptions to work through.
I can only work on my own.

And make my life happier.
Each and every day.

Cross-posted from A Life Unrehearsed. 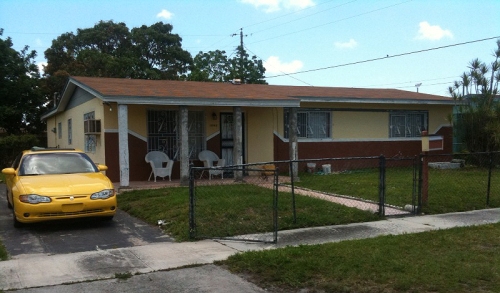 I got an e-mail from my father recently with the subject line “This is our old house!” I looked at this picture but didn’t recognize the house, so I asked him the address. He couldn’t remember the address but said it was the one by the old Levitz and the arch in North Miami; we lived there through my elementary school years. I immediately e-mailed back with “17045 N.W. 11th Avenue, 305-620-0367. I remember the house being pale yellow with a big tree in the front yard.” Dad said that, yes, it had been yellow with a big tree in the front yard. I remember that Dad’s boat was always parked on the trailer on the side of the house where that car sits now. It was a pale blue boat with a large number 44 painted on the side. Dad was a daredevil, racing both boats and motorcycles when I was a kid, probably why speed is still in my blood today. My friend Timmy lived two doors down, and my best friend Terri lived around the block. My mom and dad were good friends with Carol and Wally across the street; they had children, too, but I can’t remember their names. They were even younger than I. Dad was down in Miami on business, and when he saw that old arch, he became curious about the old neighborhood and found the house. Looks pretty sad now, doesn’t it? That address was the opening line of this emotionally raw essay.

It’s fascinating to me how our perceptions change as we grow up. When I was a child, that house seemed huge! But thinking back now and seeing this picture, obviously it was quite small. Dad said it was about 800-900 square feet, three bedrooms, one bath. I remember there being a Magnolia tree in the corner of the back yard. I think the tree in the front yard was a Magnolia as well. Based on this little house, I guess we didn’t have much money growing up, but I clearly remember that I never lacked for anything I needed in those days. My mom was a nurse and my dad worked more than one job while going to school at night; they were 20 when they were married in May and I was born in December of the same year. It wasn’t until I grew up that I realized that math didn’t work out quite right.

There was an elementary school at the end of our street, but because of the times and busing in Miami in an effort to better integrate schools, we weren’t districted for that school. I was to ride the bus to a school on the other side of town. Instead, my parents put in me a private Christian school closer to home, where I was sent home more than once, a tomboy rebelling against the “dress” code by wearing pants. My sister was also born in Miami, but then we moved to St. Petersburg before she was a year old. We were in St. Pete for two years before my parents divorced, and Mom, Kim, and I moved here to the Jacksonville area to be near my Nana and Granddaddy.

My girls and I were driving through “the old neighborhood” a while back, and I showed them the house their daddy lived in when we met and where we lived together for six and a half years. “It’s so small!” they both said. It was about 1,000 square feet, three bedrooms, one bath, built in the ‘50s, a cute little concrete rancher in a neighborhood that has now had its share of neglect. Once we were ready to get started building our current home, we put that house up for sale on a Friday, and I went over to Tallahassee for a football game.  When I got back that Sunday, DH had already sold the house. We didn’t expect things to happen quite that quickly! Luckily, DH’s daddy’s house was vacant at the time, so we were able to move in there, the very house DH was born in and grew up in. It was about the size of my childhood house, and we lived there for the nearly year and a half it took us to build our home.

I think of my perception of my house when I was in elementary school and wonder what my girls think now. Our house is not overly large by any means, especially when I think about the houses my mother and her third husband lived in and the homes of many of my friends, but yes, we are blessed to have a river in the back yard. It’s interesting for me to see how my girls react to the houses of their friends. They have commented that their friends’ houses are smaller than ours…but they’ve also commented that their friends have “soooo many toys!!!” Maybe that’s perception, too, a perception on what’s really needed.  In their friends’ houses, yes, there are lots and lots and lots of toys. Here at our house, sure, the girls have some toys, but we try our best not to give in to every new toy on the market and instead encourage playing outside, making art, playing games together, and playing with the toys they already have. They always have their favorites anyways, don’t they (and the piano makes a great fort)? I don’t remember having a lot of toys. But I do remember always being outside playing, whether in the back yard, over with Timmy, around the block with Terri, or a combination of all the above.

I know you’ve probably heard that old saying about wanting more for your kids than you had as a kid. I wonder if in these days of excess and social media overload if that line of thinking can be a slippery slope. Maybe going back to those simpler days of no internet, no video games, fewer toys and more time playing outside is what our kids, and we, really need. That’s where memories are made.