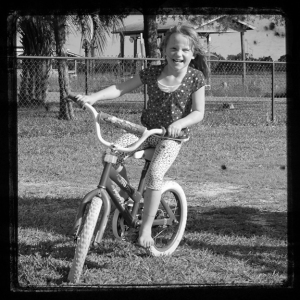 We hit a major milestone this weekend. We officially have big-girl bikers! We haven’t hit the pavement yet, but they are running laps around the backyard with ease. I guess that’s one benefit to having hard-packed river sand and scrub covering the majority of your backyard. I’m very disappointed to admit I missed “the moment.” Since I’ve been doing the Riverside Arts Market every Saturday, DH has had more time with the girls and has been practicing with them, and while I was sitting in my booth about 2pm Saturday afternoon, they were riding laps around the backyard unassisted for the first time. DH called to tell me. When I got home, they demonstrated for me so I could take pictures. Olivia, being the camera ham she is, was content to ride at least a dozen laps so I could get more and more pictures. Sarah chose to only do two laps and determined that with her glowing natural beauty, that should be sufficient to capture a stunning photo. She then put her skirt back on and pulled her ladybug chair over next to mine to watch Livvie ride.

I couldn’t resist aging these pictures. Watching the girls brought back memories of me learning to ride my bike and the series of black and white pictures my dad took of me. We lived in a big apartment complex in Miami at the time.  My mom worked full time as a nurse while my dad worked odd jobs and went to school.  We didn’t have much money, but I do have many good memories of that time. That’s when my dad and I grew up together. It’s funny how pictures do that for you.  A memory can be lost to time, only to resurface in perfect focus when an old picture crops up to remind you. My bike was bright blue with a white seat and red, white and blue streamers coming off the handlebars. After I outgrew that bike, I got the classic “banana seat” bike, appropriately yellow. Until my parents divorced, I spent nearly a month every summer in Orange Park with my Nana and Granddaddy, and that yellow banana seat bike took me everywhere.

Most of the kids in Nana’s neighborhood were boys, so the tomboy in me grew to full fruition in those days. There was a big hill near Nana’s house and we’d fly down that hill with all we had, always with one of the gang at the bottom of the hill watching for cars. If no cars were coming, that’s when we knew we could safely keep on flying, past Maria’s house, right over Capella Lane and on down to the dead end at the bottom of the hill. There was more than one occasion early on when I got the warning that a car was coming and hit my brakes in a panic, tumbling head over butt in an endo (though apparently not much has changed since I’ve been known to do that on my mountain bike these days as well). That bike took me to the creek back behind Nana’s house and down to the end of the neighborhood to the swimming hole back in the woods…forbidden territory that Nana knew nothing about (or so I thought). I’ll drive back through that neighborhood every now and then when I’m in Orange Park, and the memories of those days are so clear I can still feel the cold water of the swimming hole. I see us all…me, Ricky, Gary, Eddie, Ted, and every once in a while Maria and Sheila…climbing up that oak tree and jumping off its branches into the center of the hole, never worried about what might lie beneath, what might lie beyond, or what might face us the next day. That was childhood at its best. No worries, just fun. What’s your favorite childhood memory?

Kelly: The Magic of Childhood

Call it magic, call it make believe, call it what you want…I’m just so glad it’s there. The Easter Bunny paid a little visit to our house Sunday before we headed down to the lake. The Easter Bunny’s assistant let Easter sneak up on her, so at 7:30 pm Saturday after dinner at Chowder Ted’s, she had to run to Walgreen’s and pick through the last of the available Easter candy. Since there were slim pickin’s (luckily she had a few things left over from what she bought to bring to school for their party), the Easter Bunny’s assistant had a great idea and enlisted the help of our neighborhood fairies.

See, we have fairies living in our house. They come in and out through these lovely little doors that appeared one morning. Occasionally the fairies leave us little gifts, and the girls leave them something in return. For Easter, the fairies got together with the Easter Bunny to create these lovely little pendants. They were sitting next to the girls’ Easter basket’s Easter morning, which the Easter Bunny had conveniently left right outside the fairies’ door downstairs near my workshop (those are the artist fairies; the musician fairies live upstairs under the piano). I’ve been bombarded by questions and suggestions from the girls as to just how exactly the fairies made these pendants.

Girls: “Mama, our fairies are so small! How did they pick up the glass?”

Mama: “Well, the Easter Bunny’s got to be pretty big to carry around the baskets. He must have helped them.”

Girls: “Yeah! I bet that’s what they did. They must have flown up to your workbench and used your supplies!”

Mama: “Well, yes, I did notice that my workbench was pretty messy when I came down here this morning. I think I even saw some fairy dust! These must be extra special necklaces…”

Girls: “Yes, ma’am. We’ll have to draw them a picture to thank them.”

The magic of believing is a wonderful thing. They’ve worn these necklaces every day since. Maybe the big girls can learn a lesson from the fairies and the little girls who believe in them.