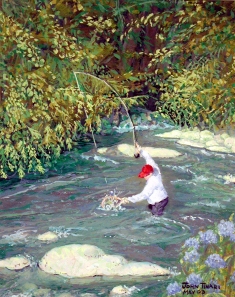 I often feel guilty or self-indulgent knowing that I am not contributing an income to my family. I have never not-contributed an income to my family, in each of its mutable forms throughout the years, for as long a time as now. I have improved my perspective on these feelings in the past six months or so, since I’ve been working on my manuscript. It is slower going than I’d like, but it is going.

I have a constant reminder in my home to tell me how important it is not to forget that creative work is purposeful work, not just an indulgence. My late father-in-law, John Tinari, and mother-in-law, Rose, married very young — I believe while he was in art school. The wedding was in January 1966 and by December, their son, my husband was born. Then within the following year, they had a daughter. Four years after that followed another son. As you have probably guessed by now, John’s dreams of being a painter were quickly put on hold as he worked trade jobs, mostly carpentry or having to do with carpentry, in order to provide for his family.

In one of the earliest conversations I had with my husband (we hadn’t even met yet; this was a phone conversation that lasted a few hours), he told me his father was really sick with lung cancer. Within about six months of beginning to know my husband and his family, his father was gone. But what he left behind was beyond legacy.

When my father-in-law realized he was too sick to work, as he underwent chemo and radiation, he put down one set of tools: hammers, saws and levels, and picked up another: watercolors, brushes, palette knives, and paper. Sometimes he worked outside, sometimes from photos while getting his treatments. The results of those two years are hanging within our home: many small to medium sized landscapes full of life and green and light and shadow. 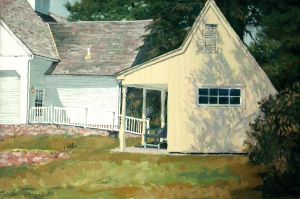 The most amazing thing to me about these paintings was finding out after I had been in awe of his execution of the variable greens in the leaves of all these paintings, is that he was colorblind to the green and red spectrum. One of my favorite paintings is of a fisherman deep in a river, red hat standing out amidst all that green. I can’t imagine how he was able to do that without some amount of divine sight. According to Rose, he couldn’t match two brown socks from his drawer.

I bring this up because I don’t want to wait until I am dying to do what I love to do most, even if at times I am working from a bit of a torturously dry well. My creative work is what gives my real sense of purpose beyond parenting or the rest of life’s sundries.

I was in my second paragraph when I turned to Andrew to confirm or straighten out a detail, and he said. “Hey, it’s Johnny’s birthday today, right?”

So, I just tilt my head up and say thank you, Johnny. This message is really from him to you. I just happened to be here to catch it.

[Editor’s note: Click on any image for a larger view.]